Returning to the Holiday Safari Jungle Lodge after my recording trip to the Elephant Breeding Centre (read about that adventure here), I am told by our leader, Greg Simmons, that we are to go in search of “the man who plays the pumpkin”. I’m not exactly sure what he means by this but I assume it is some form of musical instrument we can record, so I’m keen! It’s the morning of December 31st, 2010 and as those of us who are interested pack into a nearby troop carrier, my mind starts to wonder exactly what it is that awaits me, “how do you play a pumpkin?” I ponder.

We make our way through the streets of Sauraha, bumping along in the troop carrier as we enter the Tharu village. The long dirt roads are lined with simple mud huts, their roofs covered in dried palm fronds. Kids are playing with balls and sticks; goats and chickens scavenge about for grass and seed. We pull up and everyone piles out of the dusty vehicle as nearby villagers watch on with interest. Greg and our guide, Dill, approach some of the locals and begin to ask where we could find this mystical pumpkin man. Soon enough, they find someone who knows what they’re talking about and are lead away into the village.

A few short moments later they return, followed by a familiar face carrying a strange stringed instrument (you may remember him playing the drum and singing with the Tharu Stick Dancers). Looking closer, the instrument he carries reminds me of an Erhu, the ‘Chinese violin’, but instead of a small resonator body it has a large pumpkin! My curiosity is growing as I wonder what it will sound like and how it is played, there doesn’t seem to be a bow in sight. 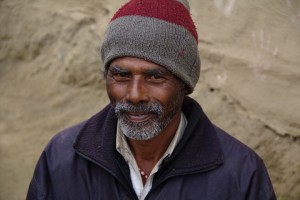 Friend of the Pumpkin man.

Sitting on a woven cane stool by one of the mud huts, the Pumpkin Man is joined by a friend (See picture to the right) who takes a seat next to him in the dirt. They wait patiently, the pumpkin man tuning his instrument and pulling out a pair of wooden clappers which he wears on his left hand. While they wait I go about setting up my rig, mounting my Schoeps M/S pair atop a Manfrotto stand. I set the stand about a meter back from the two seated men, roughly forming an equilateral triangle between them all, and raise it to just above their head height. I angle the mics down towards them, fire up my Sound Devices 702 recorder and throw on my cans for a listen.

Just in front of my rig, Greg has set up a pair of DPA 4023 compact cardioid microphones in an XY configuration (see top picture), running through his Nagra V recorder. Glancing up from the recorder he ask the two men to play a little for us so we can set our levels. They kindly oblige and begin to sing and play. I listen intently and shift my mic placement slightly, moving it forward and angling it slightly higher towards the musician’s mouths. I boost my gain level and sit back, happy with the sound I’m hearing.

I look to Greg, who has now finished his adjustments, placing a foam wind sock around the DPA mics to shield any breeze that may blow past the mud hut where we are seated. The musicians have stopped playing now and again wait patiently for us. Just to my right, Jarad is making the final adjustments on his camera as I nod to Greg, signalling to him that I’m ready to roll. Greg smiles back then turns to the musicians and kindly tells them they may begin. I hit record…

One of the village children join us.

Like many of the recordings I made on this trip, I love this one for its rawness and soul. It has an honesty that you don’t get from most western musicians when recording them. This is just two guys sitting together, jammin’ on a song. Once the song really picks up momentum, the men really start to get into it, singing their hearts out. I love when their voices break and really start to bellow. The balance between instrument and voice is good, while still maintaining a very dynamic performance. The image is great, capturing the perfect balance of ensemble without being too direct or distant. I like the way the two men alternate lines in the song and how their positions are captured in the stereo image, neither being perfectly centred.

…I watch intently as the men play. The pumpkin man is holding his instrument with his right hand, using his right index finger to pluck the single string that stretches along its length. He is only playing a single note the whole time! In his left hand he claps and shakes his percussion sticks, their small gold cymbals jingling away. One of the village children wearing an orange track suit wanders over to sit with them (see picture above). The child doesn’t seem overly interested in what is going on with all our microphones and cameras, just standing by the men, listening to them sing, gazing at us occasionally. I can’t help but smile as the men play on unfazed.

The two men, smiling as we thank them.

The song comes to a close and the men sit in silence before we begin to clap and thank them for their great performance, a smile spreading across their faces. I’m a little surprised that the pumpkin instrument only played a single note, especially after the man tuned it so carefully! But it was quite cool none the less. The two men stand and thank us before wandering back into the village to go about their daily routines and I go about packing up my rig, happy with the recording I’ve made.

We all pile into the troop carrier and head back to our hotel to pack our things. I’m a little sad to be leaving Sauraha, it’s been an amazing time here but tonight we are crossing the boarder into India. The next chapter of my journey awaits!

– All photos courtesy of Jarad Avnell, Michaël Carrere Caceres and myself.
– The recording of this performance has not changed my dislike of pumpkin.