Monks and Drums in Doramba 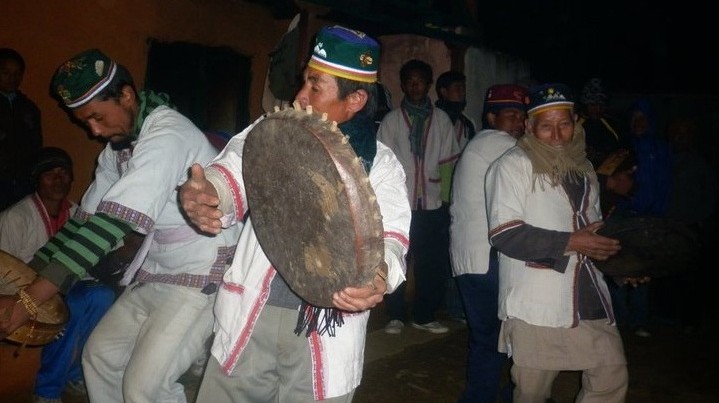 It’s another long one ya’ll, hit that play button!

I’ve just been on an eight hour bus trip from Kathmandu, up the Himalayas, to the Nepali village of Doramba. By far, this is the worst (although in some ways the best..) bus trip I have ever been on. My seat had no foam left on it, so I was essentially sitting on a metal bar; I was too tall for the seat, so my knees were pushed up against the seat in front and my head was near to touching the luggage racks above me. To make it worse, the road was ridiculously bumpy and full of pot holes (although technically, I don’t think you could really classify some of it as a road.. Closer to a river bed or small gorge…).

What this all meant was, every time our bus hit a bump I would bounce off my seat, head butt the luggage rack, squash my legs further against the front seat, and land gracefully back on a rather solid steel bar. So in trying to avoid this, I slouched forward and attempted to brace myself between the window and my steel bar. Thus, I have a sore back.

That being said, the views we’re amazing! Easily some of the most spectacular I have ever seen, and we got to ride on top of the bus for about an hour which, although exhilarating, also became quite painful after a time. Better than the bus ‘seat’ though!

But enough with the whinging!

It’s the night of December 23rd, 2010 and, after a musical welcoming ceremony (see first picture) and delicious dinner of dal baht, we are to be treated to a program of music and dance from the local villagers.

It is absolutely freezing up here, I have on about five layers of clothing, and a bonfire has been lit in a small clearing where the performance is to take place (if you listen closely to the recordings you can hear the fire crackling softly in the background). Every man, woman and child in the village has turned up for tonight’s show as the glowing embers climb into the night sky. We set up our various pieces of recording gear as the locals surround us, keenly looking over shoulders and between legs at technology they have never seen before. Not scared or threatened, just extremely curious. 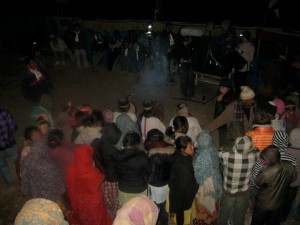 Local villagers surrounding us as we set up in the clearing.

As always, I have on hand my Schoeps MS pair and Sound Devices 702. I mount the mics atop my Manfrotto stand and extend it high into the cold night air. The aim is to capture a feeling of the whole scene, so I am positioned quite a distance back (see picture on right). In doing this I can create a stronger ‘ensemble’ with the recording, a more realistic sonic landscape of the performers playing together. This is something that is often lost from modern recordings and close miking techniques.

As one of the village elders walks the perimeter of the circle which has formed around the performers and us, telling the locals in Nepali to stay back, be quiet and not speak during the performance, I set my gain levels and hit record… 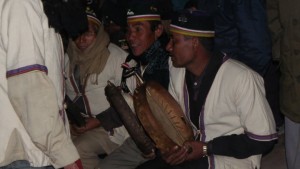 Village males with goat skin drums, hand made in the village.

The first recording (which you should be a few minutes into by now!) is three of the male villagers playing goat skin drums and chanting together (see picture on left). This is a very tribal representation of Nepali culture, something that has been played for hundreds of years and been passed down through the generations. Unfortunately I cannot tell you what it is they are singing about but, like traditional western folk songs, the songs are generally tales of kings and heroes, great wars, times past and star crossed lovers. So you’ll have to use your imagination.

…After about ten minutes of their hypnotic drumming, I’ll admit, I started to get a tad bored (The whole piece runs for almost twenty minutes and not a whole lot happens, so feel free to hit stop or skip through!). But eventually it comes to an end and we all applaud gratefully. My sore back isn’t doing me any favours tonight and standing up in the freezing cold isn’t helping a whole lot either! But there is still more to come.

Making their way through the surrounding audience, I can see a number of brightly coloured mohawks and large drums on wooden poles. These belong to the monks of the Doramba village who are to perform next, for us! Dressed in the traditional red, purple, orange and yellow attire they emerge from the crowd carrying with them two bright blue elephant skin drums; a number of long horns (which look suspiciously like vuvuzelas); a pair of cymbals; and various bells, candles, bowls and other assorted ornaments. Each of the three eldest monks also carries a small, very old, book. 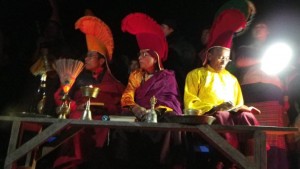 They take their place on the bench previously occupied by the singing drummers whilst a second bench is brought over and placed in front of where they now sit (see picture to the right). Very carefully, the three eldest monks arrange their paraphernalia as the remaining monks carrying instruments arrange themselves, standing behind the benches.

Knowing that the drums and horns are going to be VERY loud, I pull my gain levels down dramatically, as to not risk clipping on the recording. The monks are set up in the same space as the previous performers so no need to adjust mic position.

Not really knowing what to expect, I hit record again…

What struck me first about the monks’ performance was the seeming chaoticness and lack of musicality. This was the first time I had ever been exposed to such a thing and, I don’t know about you but, I had an idea in my head that monks would be far more controlled and serene, almost atmospheric. Of course, this is just the image that is placed upon us from years of Hollywood blockbusters and travel commercials. There are no synthesisers or swirling atmospheres in this Nepali village!

That being said, it is a very ordered chaos. The rhythms are captivating and the chanting, entrancing. It’s so raw, so real.

…As the monks chant and bang their drums they light certain candles and throw grains of rice from the small golden bowls into the air. It’s very ritualistic and spiritual. I get the overwhelming feeling that I am experiencing something really special and watch in awe as they read from their tattered old books.

Suddenly, the final horn ends and an eerie silence descends over the clearing. It is over. The monks immediately begin to back up their belongings and depart the scene as we clap tentatively. The fire is still crackling and the locals being chatting amongst themselves.

It’s getting quite late in the evening and the pain of my back dawns on me again. I realise, despite my wardrobe of clothing, I’m actually freezing and decide to pack up my gear and head to bed (read: plank of timber and blanket).

The next morning (after sleeping fully clothed) I awake to a beautiful day. The sky is blue, the air is crisp and my back feels great! I guess sleeping on a wooden board is good for your back!

I step out from the house where I slept to find the ground is frozen and crunches beneath my boots, it reminds me of winter mornings back in Armidale. Some of the other GE-OS members are wandering about, enjoying the local breakfast that is on offer, so I grab a cup of tea and join them. 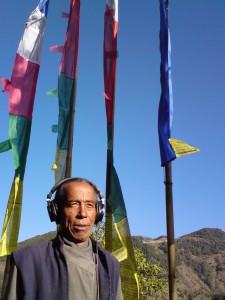 Village elder listening to my recording

Before leaving the village I take a moment to show the recordings I made the previous night to one of the local elders (see picture on the left). He approves with a subtle nod, handing back my headphones and walking off to go about his day.

I pack up my belongings and prepare myself for our first day of trekking through the Himalayas.

– All photos courtesy of Pia Herrera, Carlos Rudzats and Jonathan Olegasegarem. Except ‘Village elder listening to my recording’, that one is mine.