A Night in Varanasi with Dr Mishra 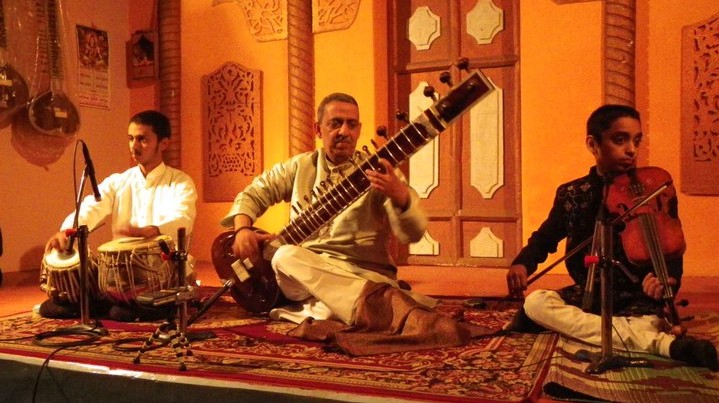 Two days ago I crossed the Nepali/Indian border, floated my way down the Ganga and entered the holy city of Varanasi. Since then, I’ve spent my time wandering the many back streets (stumbling across a bunch of local kids playing cricket), enjoying local cuisine (best paneer butter masala ever), and walking up and down the ghats that stretch the length of the city. It’s now the evening of 2nd January, 2011 and I’m on my way with the rest of the GE-OS crew to a special concert that has been organised for us.

Entering Varanasi by night, we float along the Ganga.

Leaving our hotel I walk down the dark streets of Varanasi, weaving my way around the thousands of cows that occupy them, and hail an auto rickshaw. As it pulls up I climb in with my Kata 3n1, which houses my rig, and we quickly take off, on our way to the concert hall. Speeding along, the cool night air rushing across my face, I watch the buildings pass me. Small wooden doors and closed shop fronts whiz by, silent and deserted, the usual mass of locals that surround them retired for the evening. Shortly we arrive at our destination and pay the driver the agreed sum for the trip. No one ever uses the pay meters in India so it’s a matter of haggling the driver prior to the journey in order to get a fair price. Buyer beware!

As the auto pulls away, I turn to face the hall before me. Large wooden double doors open to reveal a modest but spacious room, its walls lined with various instruments hanging in protective plastic wrapping; sitars, tablas, sarods, violins, tamburas and bamboo flutes surround me. The floor immediately before me is a small concrete area but the majority of the room is lined with carpet. At the end of the hall is a small stage, raised about one meter from the floor and covered with a number of large ornate rugs. Removing my shoes I step on to the carpeted floor and make my way around the hall, examining the beautiful instruments; all handmade and intricately detailed. As I reach the stage I admire the wooden carvings and circular pillars that adorn the back wall (see top picture). But what is this? I double take and squint closely at the pillars; they’re made of polystyrene! I laugh to myself as I take a seat on the carpet.

My fellow GE-OS travellers arrange themselves around the room, getting comfortable on the carpeted floor, and I begin to unpack my kit when the musicians arrive. Dr. Birendra Nath Mishra (see picture to the right) and his two sons, Abishek and Prashantha, make their way past us and onto the stage where they unpack their instruments and set up; it appears that tonight I shall be recording sitar, tabla and violin.

Standing back up, I mount my Schoeps M/S pair atop my Manfrotto stand, extend it just above head height and angle it down, roughly 45 degrees, towards the stage. I’ve positioned the mics directly in front of Dr. Mishra, who is in the centre of the stage, with Abishek on tabla to the left and Prashantha on violin to the right. With the stand approximately three meters from the edge of the stage it should give me a good balance of direct to reverberant sound. I fire up my Sound Devices 702 recorder and throw on my Audio Technica M50 headphones for a listen. Everything is sounding pretty good so far and with a few slight adjustments to the mic angle and my gain levels I think it’s just about perfect.

On the other side of the room, Greg Simmons is setting up a multitrack recording using DPA microphones (as seen in the top picture) and an HHB Portadrive. I take a seat back on the carpet and listen as the musicians finish tuning their instruments. Finally everyone is ready and a silence spreads throughout the hall. I hit record and Dr. Mishra begins to play…

This first recording is a solo piece by Dr. Mishra on sitar. Overall I quite like it, although the moving and coughing from some members of the audience is quite annoying! Unfortunately, when doing live concert recordings, this cannot be helped. The sparkle and magic of the sitar comes through nicely and it doesn’t seem too small in the space, which can be a problem when recording a solo instrument in a large area. The music itself is quite nice, especially towards the end of the piece, but it does tend to get repetitive at times. The obviously level of skill displayed is not unnoticed!

…Working his way up and down the long neck of his sitar, Dr. Mishra slides and bends complex notes, charming us with his playing. Listening to him my mind sails along on the journey which he leads us. To his right, his son, Abishek stares off into the distance, listening intently. I watch him as his father plays, occasionally breaking from his perfect posture to shake his head. I’m a little taken aback by this at first. Is he disapproving of his father’s playing? Did the Doctor hit a wrong note that my western ears aren’t hearing? How could he sit on stage in front of us and be so disrespectful, especially when his father is sitting right next to him?! I realise what I am witnessing is the famous Indian head bobble. Not a sign of negativity or gesture of “no”, as it is in western culture, but a sign of agreeance. He is just getting into the music in the same way that a westerner might nod their head or tap their foot. I sit back and go on enjoying the music.

The final note rings out as I emerge from the trance and applaud. Dr. Mishra nods and smiles gratefully before turning to each of his sons who take up their instruments. I adjust my position on the floor and the sitar begins again…

This is actually the third piece that was performed by the trio. The second I’ve decided not to include as it is rather lengthy and I had the gain level set a touch too high for the enthusiastic tabla playing, so some clipping occurred. Nevertheless, this recording was captured quite well after a slight adjustment in gain. Moving the mics back a foot would have provided a slightly stronger ensemble as at times it seems a tad close. I love the way the violin works with the sitar parts, moving subtly in and out, never detracting from the obvious focus of the piece. Although quite skilled, the tabla playing can at times be a touch too loud and overbearing. Keeping to a perfect relative level seems to be a difficult skill, learned with many year’s experience (see this previous blog entry for an amazing example). The lack of this results in a ‘left heavy’ performance. Of the three pieces performed on the night, this is certainly my favourite.

…Again I float away into a trance of eastern melodies and rhythms. The sparkling sitar, rapid tabla playing and soaring violin carrying me along as the three musicians play together. Watching them, I am drawn to the youngest of the three, Prashantha, on violin. His large eyes are piercing as he gazes around the hall, head wobbling side to side. It’s almost scary, but so mesmerizing.

With a final slap of the tabla skin the song ends and again we all applaud. The three musicians smile and bow as we thank them for a brilliant performance. I begin to pack up my gear, happy with the recordings and feeling relaxed and stimulated after a great concert experience. Other GE-OS members get talking to the musicians and photos are taken of us all together. It’s been a good night and as I ride in the auto rickshaw back to our hotel I can still see the eyes of the young violinist in my mind, wobbling side to side.

– All photos coutesy of Jonathan Olegasegarem.
– The eyes… The eyes! They mostly come at night… Mostly…